When i walked in, dad was sitting at a table with one of the therapist. She was trying to get dad to pull on a plug that is pushed into a hole, pick it up and put it in her hand. Dad was more interested in sleeping. This has been a normal thing in a way. She continued to try to wake him...he would open his eyes for a sec and then fall back to "sleep". He finally grabbed a hold of that plug and pulled it out of the hole....6 times! The therapist was very thrilled with this. When he was done, he rested for about 15 mins and then it was time to get up into his wheelchair and go over to the parallel bars. This is where Andy can lift dad up and dad can support himself on the bars. Dad did this several times and one time while he was standing, the therapist told dad that he could sit now...they even tried to help him sit, but dad was determined to stand. It was the look on his face that "this is killing me, but i am going to get out of here!" He ended up standing for 4 mins. This in itself is a huge task, but it doesn't end there. When they finally got dad sitting in his wheelchair, it was mentioned to dad that he needs to start using his legs and move himself around in the chair. Dad gave another look of determination and started moving his feet as if he was trying to move his wheel chair! This is a huge thing. That meant that he understood what was asked of him. This is great news.

Please pray specifically that dad will get very good rest at night so that he can work during the day and be awake. Please also pray that dad doesn't lose the determination and get discouraged. Be thankful for all of the progress that has been made! We will attempt to update you during the end of the week.
Posted by Andrew at 1:05 AM

Give praises to our wonderful God who makes all things possible. May He also give Jim strength and drive during his healing. May Christ also hold the hands of all of you during this healing. You are an inspiration to many and remind us how special each day is to us.
Your words paint a picture that helps all of us on how we need to pray for you.

Thanks for the update. PTL! What wonderful progress this is.

We will ask God to give Jim good rest at night so he can do the hard work of therapy during the day.

We are praying for God's Spirit to encourage Jim and give him the strength to endure the days ahead.

May God continue to comfort and bless all of you as you wait.

what a great update!
thx

Thank the Lord for Jim's progress!! Continuing to pray for all of you!

Dad with Alena at Christmas 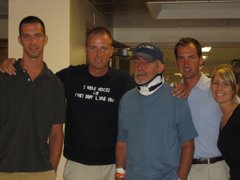 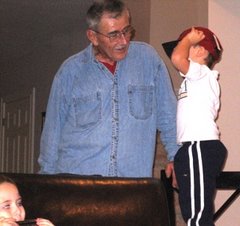 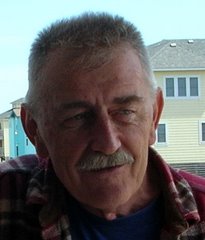 On Friday morning (Jan. 19th) around 10:50am, i recieved a call from my brother Joe telling me that he needed me at the house. I asked him what for and he told me that dad had hurt himself somehow...he had a black eye, his nose was bleeding and was "a little beat up". I immediatly got into my car and started heading that way. I called Joe back and asked him for more details and he told me that he was having a hard time getting dad up. I told him to call the EMS and he said that he thought Jason had already done that and he was on his way. When i pulled up, i saw the EMS was already there. I walked in and i saw Jason, Anna, Joe and several EMS people along with dad sitting on a gurney. They imediately took dad out in the EMS...not knowing what was wrong...just that something really wasnt right. We followed the EMS to parkview ER and had to go wait. Mom met us there as she flew across town to get there. We had to wait a long time (it seemed like days!) before we were told what was going on. The chaplain kept coming out to "brief"us...but thats all it was, a "brief". Finally, the ER doctor called the family together and told us the news...dad has a broken neck and he is bleeding in and on his brain on both sides....this is very serious. "Its a bad deal" the ER doc kept on saying, but we had to wait until the surgeon would come in and take a look at the CT scan before we could find out for certian what was wrong. Dr. Young finally came in and said that he had looked at dad and his scan. Dr. Young was very "matter of fact" with us which was good. We needed that! He told us very similar things to what the ER doctor told us. He said that dad had broke his neck, C2 to be exact. He also said that he was bleeding in several areas in his brain. He needed brain surgury immediatly. On a scale of one to ten...with ten being the worst...dad was a "plus 10". Dad went into surgury and was there for 3.5 hours or so...he came out of surgury fine but we found out the damage was worse than they had thought. They had to remove some of the damaged area and he would be on life support. We were told that the next 3-10 days are life and death...or very critical. What we think what happend is something as follows: Dad was sleeping down in the basement which is a normal thing. Between 8:30am and 10:30am, he tried going upstairs. This info is a little sketchy because we werent there, but based on some of the info that we have seen, we think that he tripped on the stair going up and fell...hitting his right eye on the stereo and then hitting face first on the ground. This created the damage that we are aware of. We spoke with the cardiologist today and found out that dad has also had a heart attack with in the last eight days, but they have not figured out exactly when. There is a thought that this might have caused the fall be we are uncertain. Dad is in stable but "second to second" condition. If and when dad comes out of the "coma" state, there will likely be many months of therapy that needs to be done, plus until the brain issues are resolved, they can not even think about looking at his broken neck. To sum it all up...dad is in very bad condition. We thank you all for all of your prayers and support and all of the food and gifts. Your love for my dad and our family is amazing and we are extremely grateful. We will continue to update you as we know more. Please continue to pray!! Pray for dad (jim) for healing. Pray for mom (sue) that she can continue to be strong. We do know that we most likely havent seen the worst yet. This is when we need your prayers the most. Please feel free to enter your thoughts on this blogspot as we will update you as we know more. We are very thankful for the love you all have shown. 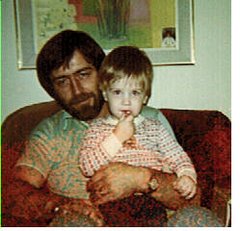 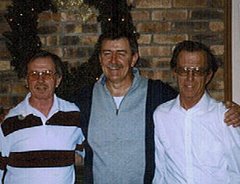 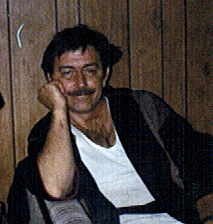 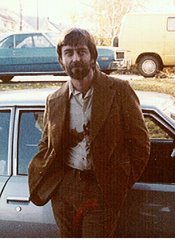